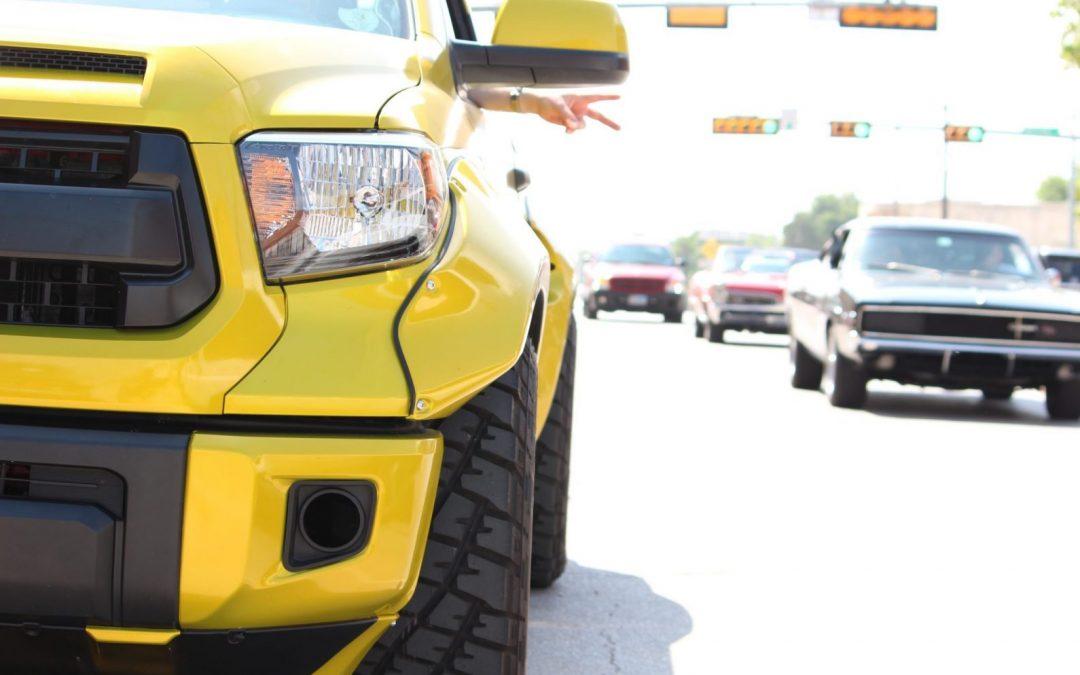 All in all, the Top Gear Drive was a huge success. Folks came from all over just to see 3 guys that goof off in cars on TV, and we couldn’t be more thankful. Some came as far as Wisconsin and even Maryland. WOW! Thanks to everyone that came out to support Speedway Children’s Charity.

With the Drive In over, it was time to hop back in the car and make our way to the capitol of Oklahoma, Oklahoma City. Once again, Ryan Eversley was my co-pilot. The first thing we noticed when getting in the car, well actually outside the car first, was that the Roadkill guys, Mike Finnegan and David Freiburger, had infiltrated the Tundra and put stickers everywhere. And I mean everywhere. We were finding them the entire ride. It made for great entertainment during an otherwise mundane ride.

With the Continental guys in tow, we stopped for lunch at a hamburger joint called Braum’s. They had great burgers and shakes, but the highlight of the meal was find a seat next to a stranger and striking of a conversation. He was a soon to be 80-year old named Elbert and he was what you imagine when you picture a salt of the earth midwesterner. He was kind and caring and loved to talk. Ryan and I had great conversations with him over lunch, even ending the adventure getting a picture with him.

We rolled into the venue at Remington Park around 2:30 and got the vehicles placed on display in the Continental Tire/Petty’s Garage rig. Immediately upon stepping out of the Tundra, we started sweating, and didn’t stop until we were back to the hotel. But that didn’t deter me from signing as many autographs and taking as many pictures as I possibly could. I also was able to finally walk around the venue space and the parking spots. The coolest thing about HRPT is that between the participants and the spectators from local towns, the parking lots turn into the world most amazing and eclectic car show. So much fun.

I met lots of fans and had a great time, in despite of all the heat!